Language Exams Prepare Students to Study in Germany, May 2022

Liebe Freunde,
The German School Association in Kirkwood has been approved as an official testing site for the German Government Language Diploma I and II. This is a major achievement, as it certifies that the students who pass these exams have the necessary language skills to study in institutions of Higher Education in Germany.
To mark this achievement, the school celebrated with the students and distinguished guests. Keynote speakers were Dr. Hardy Boeckle, Head of the Economic Department of the German Embassy in Washington, DC, and Susanne Dreyer, German language consultant from the Central Agency for Schools Abroad.
“The school is important for the Greater St. Louis area”, explained Jim Martin, President of the German School. “Students from the entire region, including outlying counties and Southwestern Illinois, attend the school. The GSA enables children whose school districts do not offer German classes to still learn German and advance to meaningful levels.”
“The fact that we were approved by the Conference of the Ministers of Education and Cultural Affairs in Germany to conduct official German language exams reflects the high standards we set for our German classes.” said Carmen Freeman, lead teacher and continued, “We have worked hard to set up a children's program that takes children from kindergarten through to taking the DSD I and DSD II exams.”
Freeman emphasized that the German School and the exams are for all children who would like to learn German or are already learning German in all schools in the greater St. Louis area. She encourages all children who study German or their parents to look into the prerequisites and benefits of passing the exams, especially if the child intends to study in Germany.
The German School Association is teaching German to adults and children from ages 4 years old and on. Children classes are Saturdays 9 to noon, adult classes are Saturdays 9 to noon and Thursday evenings. Beginners to advanced speakers learn German in an enjoyable atmosphere. The school was established in 1962. 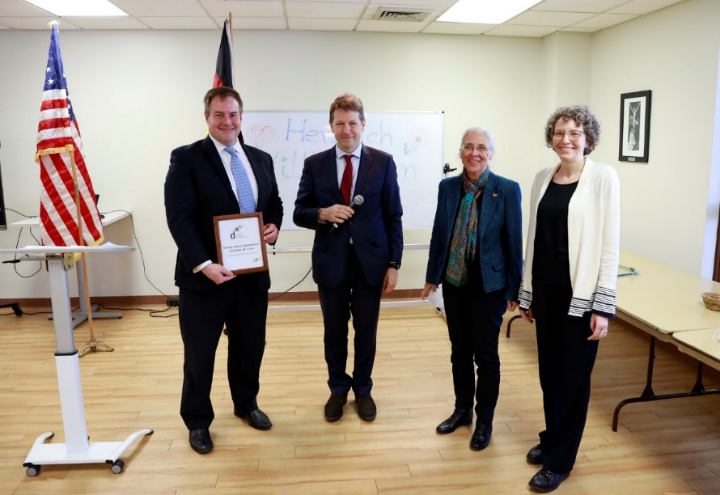 We hope you and your families are staying healthy and safe during these challenging times!

Although the German School has also faced challenges, we are very grateful for the incredible support that we have received from the German School community! In fact, your support has enabled the 2020 – 2021 school year to successfully continue with 60% of the student body participating online this year versus the onsite classes that we traditionally offer. Our talented and motivated teachers are already planning their high-quality German language curricula for the second semester. While the teaching staff and Board of Directors are also actively discussing various approaches both onsite and online for the next school year, we have made the decision to continue the online format for the second semester of the current school year.

The end of the first semester has always culminated with the very special Weihnachtsfeier, our annual December celebration in partnership with the Deutscher Kulturverein and Deutschmeister Brass Band. The program has always included entertaining songs, poems, skits, and readings to remind the audience of Christmas as it is celebrated in German-speaking countries. For many, this has been an annual tradition for the whole family! However, in the interest everyone’s health and safety, we have decided not to host the program. This will be the first time in 58 years that our teachers and children will not be able to ring in the holiday season with this wonderful event.

For the German School, the Weihnachtsfeier has also been the primary annual fundraiser where the generosity and support of organizations, businesses, and individuals has enabled the school to grow. In the past, event sponsors purchased program ads and donated amounts from $100 up to $1,000, while others made cash and check donations of $10, $20, and $30. While we fully intend to re-start the Weihnachtsfeier tradition in December 2021, we are finding ourselves in a position to address the funding gap and would like to make an appeal this year for donations to support the outstanding work our school is doing.

Frohe Weihnachten! Merry Christmas!
The GSA Board of Directors

Letter from the German Consulate, December 2019

The GSA is pleased to announce that it has received the results from the annual National German Exam administered by the American Association of Teachers of German (AATG). Students who taking the Level I Exam for a second year showed an average increase of 12 points from 2018. The improvement was even more dramatic for students taking the Level II exam for the second time, with a 30-point increase. For the students who took a higher-level exam than last year, the average score remained in the same range, which shows tremendous improvement. This is yet another example of the GSA’s proven success in providing German language education. Congratulations for all of the students who took the test!

Letter from the German Consul

The German School Moves To Kirkwood

The German School Association published this press release on May 9, 2017